Report: The KFG at the Long Night of Science

On June 2, 2012, Berlin’s Long Night of Science celebrated its 12th anniversary. About 185,000 visitors attended the event at Berlin universities and other scientific institutions. The KFG used this occasion to present its current research projects and to discuss solutions to the Euro crisis in a panel with experts of Freie Universität Berlin.

The panel discussion moderated by Tanja A. Börzel engaged around the question “Can the EU learn from others?”. Susanne Lütz, professor for International Political Economy, first examined causes and distinctive features of the European financial crisis. Heterogeneity in the Eurozone, the lack of monetary instruments such as devaluation and “moral hazard” were identified as key problems. KFG fellow Arie Krampf elaborated on the problem of heterogeneity and superficial integration. He suggested discussing the introduction of two different growth models with different sets of rules in the Eurozone to ensure a more flexible approach. 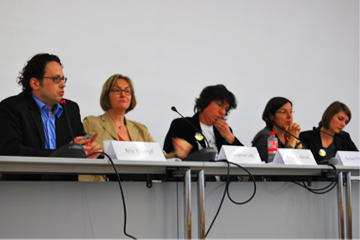 Barbara Fritz, professor for Economics at the Institute for Latin American Studies, argued that the crisis could have been handled better if the European Union had learnt from the experience of other regions. Financial crises in Latin America, for example, show that the differentiation between liquidity and solvency crises is essential for an effective response. Verena Schüren, research associate at the Center for International Political Economy, presented further examples of responses to financial crises from Latin America and Asia. She pointed out that a thorough analysis is necessary to determine how other regional models can be applied in the European context. 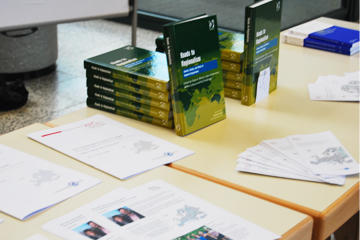 Responding to questions from the audience, the panel focused on the issues of deeper integration and centralization as well as the problems of democratic legitimacy associated with the loss of national sovereignty. “Moral hazard” was addressed as another sensitive, yet crucial issue of the European crisis. Barbara Fritz emphasized the need to reduce such risks in advance and drew attention to the limitation of public debt and the regulation of the financial sector. Furthermore, the audience expressed interest in the case of Greece and asked about possible solutions. The panelists highlighted the importance of keeping the country in the Eurozone. On its way out of the crisis, the panel agreed, Greece needs to be supported through debt restructuring and growth stimulation measures. 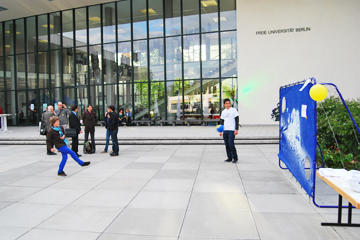 "Kick the Euro" contest for all visitors of the event

In addition to the panel discussion, the KFG fellows presented current research projects in a poster exhibition. Visitors seized the opportunity to direct questions to the fellows and to converse in small groups. On the sidelines of the exhibition, Tanja A. Börzel, Lukas Goltermann, Mathis Lohaus, and Kai Striebinger released their new book “Roads to Regionalism. Genesis, Design, and Effects of Regional Organizations”. It brings together new findings on regional organizations in Asia, Africa and Latin America. Visitors of the event also highly enjoyed the goal scoring contest “Kick the Euro” including great prizes and a thrill of anticipation for the European Football Championship.