Report: "The Euro Today: Is There A Tomorrow?" - a lecture by Benjamin J. Cohen

On Friday 14th, Benjamin J. Cohen gave a talk at the Freie Universität Berlin. Cohen, who is a professor of International Political Economy at UC Santa Barbara, is probably most famous for his work on the Geography of Money. He was invited by the Kolleg-Forschergruppe "The Transformative Power of Europe" and the International Research Training Group “Between Spaces” to talk about the future of the euro as an international currency.

As the somewhat pessimistic title of the lecture – “The Euro Today: Is There A Tomorrow?” – suggests, this was not meant to be a pep talk for worried Europeans. In fact, Cohen’s short answer to his own question is: No, the euro will not bounce back from its current crisis, but instead face a “long, lingering slide into marginality”.

First, some preliminaries: Cohen was not talking about the future of the currency as such, but specifically about the euro’s role as an international currency: To what extent will it be used by non-members of the eurozone – not as a substitute domestic currency (“dollarization“), but for international purposes? More technically, the question is about the use of a currency as a unit of account, store of value, and/or medium of exchange.

To put it short, the argument here is that the euro is nowhere close to the dollar both in scope (which functions it fulfills) and in domain (where / by whom it is used).

The crucial problem, according to Cohen, is that there is no genuine European federation to support the currency. Without an institutionalized transfer union, fiscal imbalances in the EU can only be fought by political agreements. A repetitive pattern of rescue packages and “shoddy compromises” is the result, and the permanent pressure on debtors to implement austerity policies leads to an “anti-growth bias” inherent in the euro project. 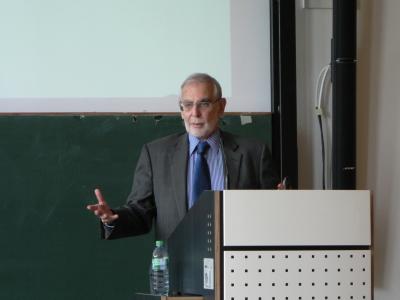 This fundamental flaw, at the end of Cohen’s causal chain, lets market actors (investors, traders, etc.) lose confidence in the stability of the euro and discourages them from using it for international trade and financial needs. Thus, while EU policymakers won’t let the euro die, it will never become a full-fledged international success - the euro will neither fail, nor will it succeed.

A possible solution – a political federation with an automatic transfer union to fix fiscal imbalances – is out of reach: According to Cohen, the EU’s and the Eurozone’s best days are behind them; now both groups have just grown too diverse and too big for their own good.

By Mathis Lohaus; another version of this report was published at the IR blog.