Please find here the programm of the conference. You can access the podcast of each paper presentation by clicking on the names of the presenter in the text below.

In recent years, there has been a visible increase in the scholarship on Turkey’s EU accession. In contrast to the current state of the accession negotiations, the controversy about if, when, why and how Turkey should join the EU continues to stir up heated discussions in the European public and in academic fora. This is not too surprising, given that Turkey’s accession indeed poses a number of challenges to the EU and the political and socio-cultural construction of “Europe”. Yet, the polarization of the debate into a “pro vs. contra Turkey’s EU membership” - which ever so often frames the discourse on the topic - has become increasingly repetitive and is not moving the discussion forward.

Bilgin Ayata (post-doctoral fellow at the KFG) and Banu Karaca (Sabanci University) jointly organized a two-tier conference. The first part was hosted by the KFG in Berlin, with the primary aim to bring together junior and senior scholars from Europe and Turkey to search for fresh and innovative approaches. The first conference identified three core themes: 1) historical and comparative analysis of EU-Turkey debates; 2) the role of im/migration and 3) norm diffusion and minority rights. In the call for papers, an interdisciplinary conversation including scholars from neighboring disciplines was encouraged. 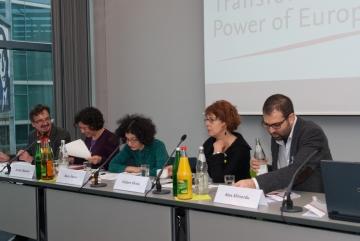 After an overwhelming response, 22 papers were selected for the conference that took place from February 3- 5, 2011. Scholars from a broad range of disciplines, from law to literature, came together in six panels. The conference began with around 50 participants that included members of the KFG community as well as scholars from the larger university network of the Berlin-Brandenburg area. The first panel “Revisiting Controversies on the European Union-Historical Inquiries” featured a political scientist and two historians - Daniel Thomas (University College Dublin), Mehmet Dösemeci (EUI Florence) and Martin Rempe (KFG Berlin) - whose thought-provoking contributions on controversies in the early years of European integration provided an excellent starting point for the conference. Eva Heidbreder (Hertie School of Governance, Berlin), a former fellow of the KFG, served both as chair and discussant. The second panel “Re-examining Discourses on Civilizational Difference” consisted of two sociologists, Ates Altinordu (Sabanci University) and Meltem Ahiska (Bosphorus University) and an anthropologist, Banu Karaca (Sabanci University). Their presentations critically interrogated the discourses on Turkey’s otherness - be they constructed culturally or religiously. The conference participants continued their exchange during the lunch break and reconvened for the next panel on “The Role of Im/migration in the Turkish Accession Debate” that smoothly built upon the previous panel. The innovative contributions by Ayhan Kaya (Bilgi University) and Ulrik Pram Gad (University of Copenhagen) highlighted the relevance of Turkish (or Muslim) immigrants in the EU for the debate of Turkey’s accession. The last panel of the first day “Contingent Rhetorics in and about Europe: Examining Euro-skepticism and Turco-skepticism” featured presentations by Beken Saatcioglu (Institute for European Integration Research, Vienna), Can Büyükbay (University of Zürich) and Anna Herranz Surrealles (Institute Barcelona d’Estudis Internacionals) who offered insights both into euro-skepticism in Turkish political parties as well as  the skepticism in EU institutions and the European public sphere towards Turkey’s EU accession. 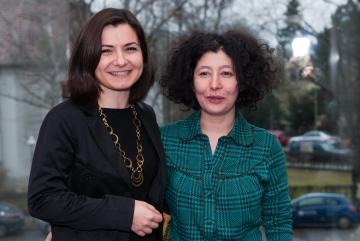 After two days of vibrant discussion, the conference ended with a brainstorming session on future themes to focus on in the second part of the conference in Istanbul.