The identified science programmes have to be classified in a way so that the structural differences, if any persist, actually appear. We are interested in distinguishing relevant structures, which means we need criteria that would define the scope of our interest as narrowly as possible. 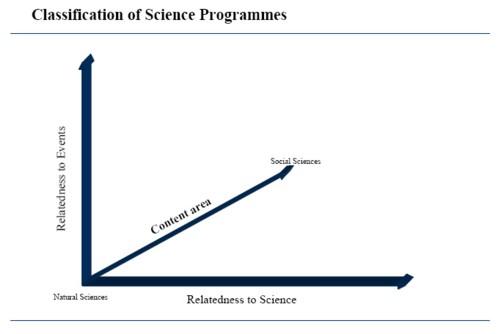 The relatedness to science refers to a core element of the organisation of journalistic perception of the environment:  particular structures within media systems that have been evolved in order to produce science and technology contents.

The science section within a greater organisational body would be a typical example for structure that, according to Klaus Meier, had been differentiated in order to increase the capacity of journalism in observing science. The more or less firm implementation of structures like science sections throughout editorial organisations has sustainable consequences for scientific and technological topics to become public. The determining point is: only topics that suit the developed structures have the chance to be broadcast, meaning topics which meet the scientific demands.

This is not only true for science sections, meaning units specialised on observing the science system. It is also true for sections which are also specialised units but in terms of audiences rather than in terms of content areas - that again meaning units specialised e.g. on fulfilling an observed or assessed demand for service, advice or other needs. This specialisation also has serious consequences for the organisation of perception; any scientific topic that cannot be identified as service or advice has no chance to be broadcast.

The expression event in journalism contexts refers to news. Events become news when information with characteristics of a novelty gets diffused, fulfilling criteria like unexpectedness. According to Barnhurst and Mutz these two elements - the report of events and their novelty to the hearer - have constituted the core meaning or denotation of news in the 20th century. The relatedness to events in journalism is a serious topic of change that affects the press system as a hole. Changes in the relatedness to events coincide heavily with the increase of speed which events get spread through the internet with. To underline the meaning of events for journalism, the discussion about the role of the printed press in the new age of online-journalism can be reconstructed as a redefinition of the relatedness to events.

The outlined approach leads to distinct patterns of Science Reporting in the analysed countries.