About the Institute of Social and Cultural Anthropology

The subject of ethnology has enjoyed a nearly 150-year-long institutional history in Berlin, beginning in 1869 with the founding of the ‘Berliner Gesellschaft für Anthropologie’–the successor of which convenes to the present day–under Adolf Bastian and Rudolf Virchow, two pioneers of the field in Germany. Anthropology has been a part of the curriculum at the Freie Universität Berlin since its establishment in 1948. Throughout the various changes that have taken place since–including shifting regional, methodological and theoretical focusses–the Institute has continuously tracked and participated in developments within Cultural and Social Anthropology as international academic fields, while maintaining a commitment to empirically-grounded, regionally-specialized research as well as to interdisciplinary collaboration, adapting theories and methods from across the humanities and the social and natural sciences. 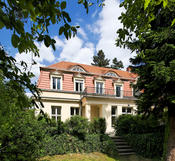 The Institute of Social and Cultural Anthropology (before July 2015, it was called "Institute of Ethnology") is located in the Dahlem district of Berlin, at Landoltweg 9-11, in a former villa with an inviting and spacious garden. It is only a very short walking distance away from the main buildings and central cafeteria of the Freie Universität. An additional villa, around the corner at Thielallee 52, was acquired by the institute in 2013 and houses offices for academic staff. The central university library as well as the political and social-sciences library, which has overseen the ethnology collection since 2007, are also within easy walking distance. Students regularly visit the institute in order to attend lectures and seminars or to make use of the garden and the student-run café ‘Goldfish’. Alongside the BA and MA degree courses in Social and Cultural Anthropology, the Institute offers an English-language MA specialization in Visual and Media Anthropology. All three courses provide an excellent university-level training grounded in current debates within the discipline and topics of contemporary global concern.

With regional specializations in island Southeast Asia and East and Southern Africa, the Institute conducts and supervises a number of doctoral and post-doctoral research projects, many involving aspects of migration and transnationalism linking them with Europe. Students at the Institute have the opportunity to actively profit from and become involved in the research conducted by staff. The work of the Institute enjoys an excellent national and international reputation and is divided amongst seven research areas: Anthropology of Emotion, Medical Anthropology, Environmental Anthropology, Visual and Media Anthropology, the Disaster Research Unit and Anthropology of Religion. As part of the DFG Excellence Initiative, the Institute is linked with the Berlin Graduate School of Muslim Cultures and Societies and the Graduate School of East Asian Studies as well as the Cluster of Excellence “Languages of Emotion” (LoE) at the Freie Universität. It collaborates with the FU Center for Area Studies and the other institutes within the university’s Department of Political and Social Sciences. With its additional success in securing external funding for a range of research projects, the Institute is among the most research-intensive in Germany. It is also well-connected internationally, profiting from a wide network of partner universities and institutions abroad and overseas.