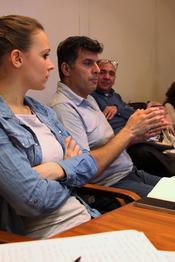 Find more insights and the study trip program on this blog

From March 18 to 23, 2018, ten Master’s students from the Institute for Media and Communication Studies at the Free University of Berlin participated in a study trip to Lebanon. Guided by Prof. Dr. Carola Richter of the Free University Berlin and Prof. Dr. Tamirace Fakhoury of the Lebanese American University, the students were able to gain exciting insights into Lebanon's refugee politics, the commitment of local and international NGOs to Syrian and Palestinian refugees and the media approach to the refugee topic. In June 2018 Lebanese students will visit Berlin.

Why does this project take place in Lebanon and Germany? In both countries around one million Syrian refugees have arrived in the past years only – a challenge for both. To see the difference: Lebanon is a much smaller country, marked by a civil war that wasn’t long ago. In order to evaluate possible measures and solutions of refugee politics, the students’ aim is to learn about the political and historical background of each country. Therefore, on the first day of the excursion, an introduction with diverse lectures took place at the partner university, the Lebanese American University. A further background discussion at the Beirut office of the Konrad-Adenauer-Foundation also provided deeper insights into the complex historical and current political developments in Lebanon.

Being students of media and political communication, naturally the discussions on the first day focused on the media coverage of flight. In conversations with communication scholars, the students compared deficient reporting patterns of the Arab media with those of the German media and found more parallels than differences. With this background, the group met journalists in the following days who reported on their own media practice, including the Campji media project, documentary filmmaker Diana Moukalled and LBCI news reporter Sobhiya Najjar – each of them being motivated journalists who want to give refugees a voice and counteract common stereotypes.

Two further meetings with filmmakers during the study trip illuminated the lives of refugees before their flight and in exile from a more artistic perspective. The documentary „HUNNA. Mothers of the Revolution” tells the story of four women who fought and still fight for the Syrian Revolution. The short film "Maram" portrays an 11-year-old Syrian girl who sells roses night after night in Beirut's district Hamra to support her family.

Another day of the study trip was dedicated to visiting the headquarters of UNHCR, the United Nations Refugee Agency in northern Lebanon, which provides governmental-like support in the registration and care of refugees. During the subsequent visit to an "informal settlement", the students had the chance to talk with two Syrian residents, Mohammed and Fatima, who build up a school in a tent for the children of their settlement on their own initiative.

At the end of the study trip, the students examined the refugee policy of Germany and Lebanon in intercultural research groups with students from the Lebanese American University. The meeting served as a review of an exciting study trip and as a preview of the upcoming visit to Berlin.