What role(s) do faith-based organisations (FBOs) from diverse Christian and Muslim backgrounds play in the provision of social services in contemporary urban Africa? How can the collaboration between FBO practitioners and researchers be envisaged, and what expectations do they have in relation to each other’s work? 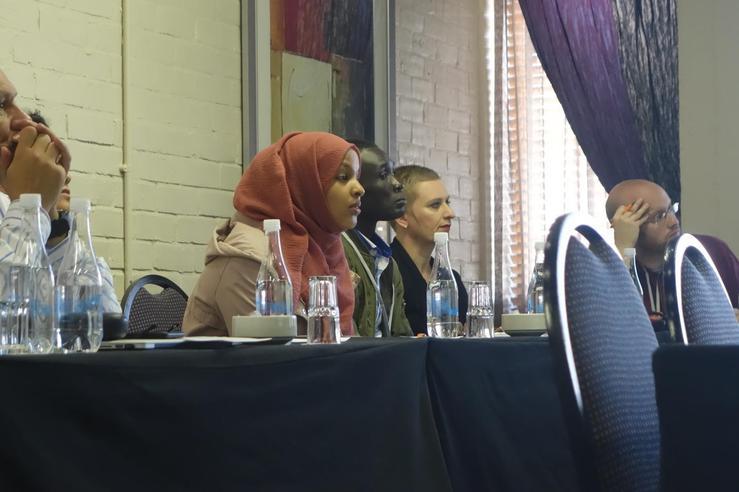 Participants listening to the welcome notes and introduction to the workshop. Photo: Ala Alhourani

The workshop was opened by Abulkader Tayob (University of Cape Town), who welcomed the attendees and introduced the topic of the workshop. This was followed by a welcoming note from Hansjörg Dilger (Freie Universität Berlin), the team leader of the project, who provided an overview of the background of the collaborative research group, which started its activities in 2017 and is funded through the German Research Foundation (DFG).

After the welcome notes, there was a series of paper presentations and discussions divided into three panels. In the first panel, Bakheit Mohammed Nur Mohammed (University of Khartoum) presented a paper titled Islamist Education Policy and Epistemic Orientation in Sudan. He discussed how the current Islamic regime of Sudan has implemented explicit and substantial measures to increase the ideological influence of a particular form of Islam through education. His paper was unique in the context of the workshop insofar as it dealt with an organisation that is not a ‘typical FBO’ but a state-owned initiative. The second presentation came from Chance Chagunda (University of Cape Town), whose paper explored the role of prosperity (mainly Pentecostal) churches versus mainline (i.e. former mission) churches in human development. He argued that apart from paving the way for colonialism in some parts of Africa, the mainline churches have been instrumental in contributing to human development through their involvement in healthcare, education, skills development and building the capabilities of individuals and communities. On the other hand, prosperity churches, with their focus on material wealth, do not seem able to attain the same outcomes– even though they are gaining increasing popularity and often attract the poorest groups in society. The ensuing discussion emphasised that it is important to adopt a more nuanced perspective on prosperity churches, since many of them are also getting involved in issues of development and providing support for beneficiaries who are in need.

The second panel started with the presentation of Nuraan Osman, the director of Ihata Shelter for abused women in Cape Town. She described how her organisation has implemented a number of social and psychological support services for its clients over the last decade – but emphasised that her organisation is not a ‘typical FBO’, as religion is not writ large in the shelter’s everyday practices and interactions with its clients, despite its provision of halal food and its reliance on Muslim Aid Australia as its main sponsor. Her contribution was followed by the paper of Fungai Chirongoma (University of Cape Town), who offered insight into her ongoing research on the role of Christian and Muslim FBOs in relation to gender-based violence in Cape Town. Her presentation shed light on the ways in which the organisations of her study deploy “transformative ritual(s)” for empowering the women they work with. The final paper in the panel came from Mussa Muhoja (University of Dar es Salaam), who showed how the Kuwait-funded African Muslims Agency (AMA) in Tanzania has launched a number of formal and informal health interventions in Dar es Salaam. By combining prayer and proselytisation with the establishment of a health centre and the running of mobile clinics, AMA seeks to provide access to health care services to Muslim populations in under-resourced areas within and beyond the East African city. 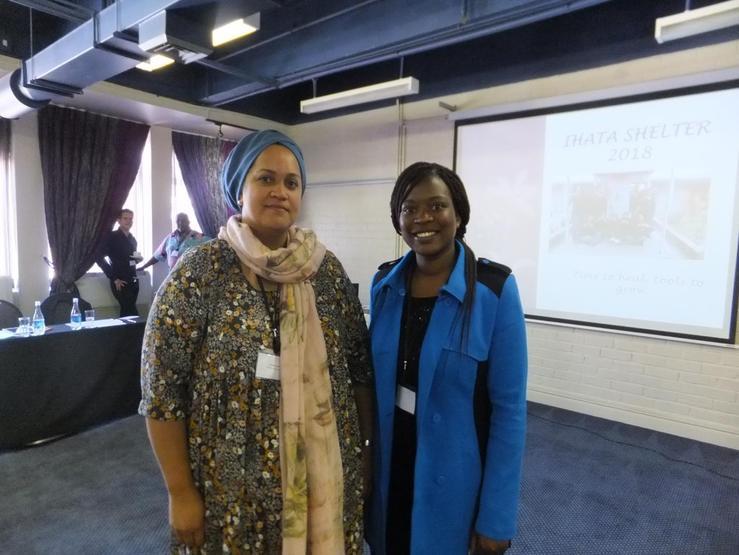 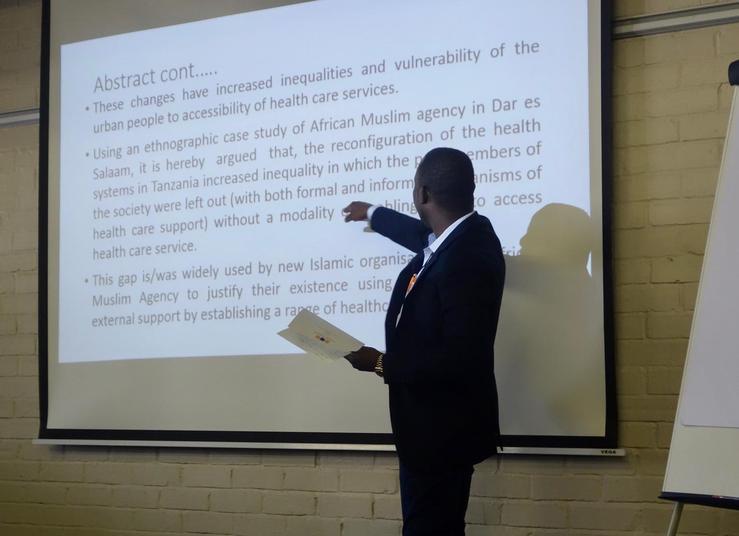 The third panel opened with the presentation of Ala Alhourani, whose paper was titled Food and the Performance of Citizenship and Humanitarianism. He explored the multiple ways in which the Muslim FBO Mustadafin Foundation is performing and establishing a Muslim sense of citizenship and humanitarian belonging in post-apartheid Cape Town through the provision of food. His paper sought to establish a connection between sensory experiences and the meanings of social gatherings on the one hand, and the sharing of food among Muslims in Cape Town on the other. Alhourani’s presentation was followed by the paper of Eleanor Higgs, with the title ‘We are Christians’: The Shifting Narrative Identity of the Young Women’s Christian Association (YWCA) in Kenya. This paper showed how the YWCA in Kenya, which was founded in 1912, has changed its attitude with regard to issues such as HIV/AIDS and family planning over the last decades – e.g. by allowing the use of condoms – while still seeking to maintain and emphasise its Christian character and status. 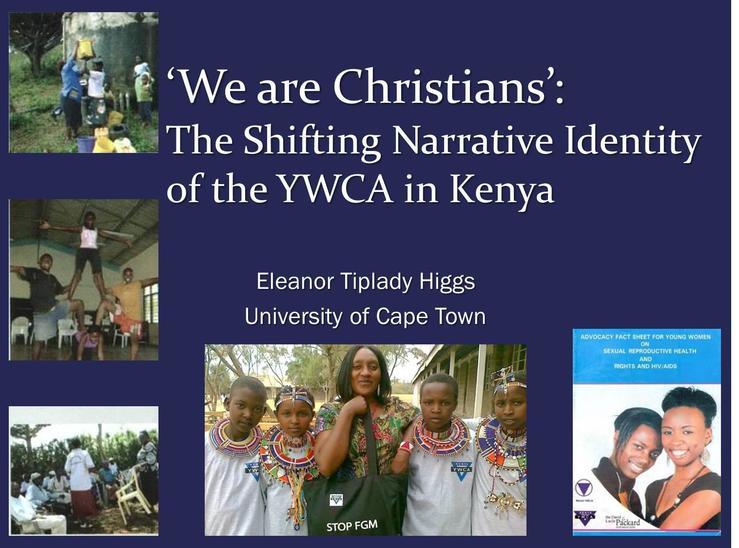 The last panel of the day started with the presentation of Marloes Janson (SOAS University of London), titled The Spiritual Highway: Studying Religious Plurality in Lagos, in which she provided insight into her ongoing research on faith-based development and urban restructuring in Lagos. By focusing on the higher education projects of a number of Christian and Muslim actors in the former Nigerian capital, she argued that these religious organisations often compete with, but also borrow from and mutually influence, one another, thereby prompting us to develop a new framework to study Christian-Muslim interactions in multi-faith settings.The final paper of the day was given by Jill Olivier (University of Cape Town), who concluded the panel and whose presentation served as a starting point for the general conclusion. By drawing on her long-term experience in systems research spanning religion and public health/development, Olivier presented an overview of the multiple existing networks and research initiatives in the field of religion and development. She emphasised the need for researchers to learn from and build on one another’s work in this highly fragmented and compartmentalised field of research. 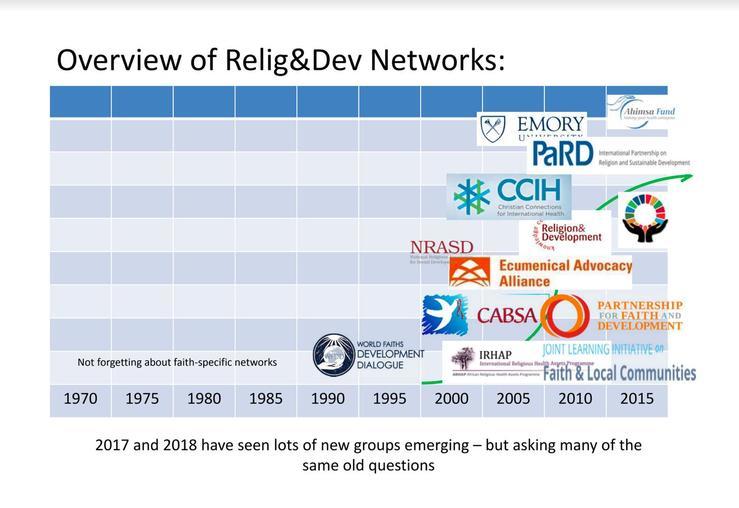 Slide from the presentation by Jill Olivier: Heuristic overview of the increase of Religion & Development Networks since the 1970s. Copyright: Jill Olivier

In the concluding discussion, a number of issues were highlighted that the workshop presentations had raised in relation to the field of faith-based development in urban Africa. In particular, it was emphasised that while there is a need to be as precise as possible with regard to the use of the term “FBO”, it seems unlikely that an ultimate agreement on its definition can be achieved; not least in light of the longstanding debate in the relevant literature, which has been unable to resolve the issue conclusively. The same is true for the term “development” itself, which has different meanings among a wide range of actors and needs to be understood both with regard to globally travelling definitions as well as local understandings of the concept.

There was also a shared acknowledgment among the workshop participants that researchers from the social sciences and the humanities need to become more aware of the specific contributions they can make with regard to the already abundant interdisciplinary literature on religion and development. One distinguishing contribution they can make is the thorough contextualisation of their case studies in regard to the societies and material (often urban) environments in which the FBOs they study operate; thus providing insights into both the specificities and the overarching dynamics of their research sites. Such careful contextualisation will also allow us to understand how Christian and Muslim FBOs in Sub-Saharan Africa relate to the development interventions of other religious traditions and in other regions; as well as to gain a better understanding of the extent to which the (secular) state is involved in determining what religion is and the activities in which FBOs engage.

Finally, the workshop participants agreed on the necessity to intensify conversations and collaboration between researchers from different disciplines and practitioners in the field of faith-based development in the future. Only in this way can they shed light on the various strengths and blind spots that each of the fields has cultivated over the last decades, and make such mutual engagements fruitful for the benefit of the communities they study and serve.

Published originally on the Blog of the Centre for Religion and Public Life, University of Leeds.

Mussa Muhoja is a PhD candidate at the Department of Sociology and Anthropology at the University of Dar es Salaam. His doctoral research is on health care services (both formal and informal) among the Neo-Pentecostal Churches and Muslim revivalist organisations in urban Tanzania. Before starting this project, Mussa was working as an assistant lecturer at the Department of Economics and Social Studies, Ardhi University-Tanzania, and is currently on study leave. He holds a Bachelor’s and Master’s Degree in Sociology as well as a Bachelor of Law and a Postgraduate Diploma in Legal Practice.