Political Bodies and Minor(itarian) Trajectories: The Affective Mediation amongst Minorities in Indian Politics 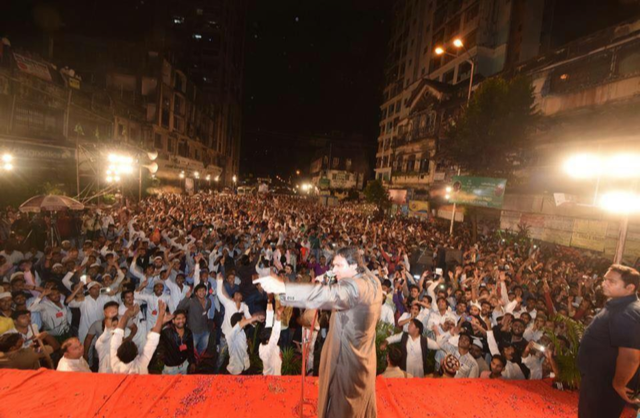 Figure : This image is used in the head-section of the Facebook page of Akbaruddin Owaisi

Max Kramer is a postdoctoral fellow at the Volkswagen Freigeist project "The Populism of the Precarious: Marginalization, Mobilization, and Mediatization of South Asia's Religious Minorities". Within this project, he investigates the imaginary and affective dimensions of minoritarian belonging and politics in India. These include images of leadership in popular culture as well as the images and rhetorics used for electoral mobilization or moral critique. Crucially, Kramer, looks into the emancipatory potentials and limitations of these images and speech acts within the circulations of cognitive capitalism and the current political dispensation in India. He combines approaches from star culture and political stardom with those of political mediation and a media anthropology to better understand the situatedness of political imaginary and political affect in an inter-state comparative angle (Uttar Pradesh and Goa).

Taking the national expansion of the Hyderabad based party All India Majlis-e-Ittehad-ul-Muslimeen (AIMIM) and new party entries in Goa (Aam Aadmi Party and Trinamool Congress) as case-studies, Kramer investigates the imaginary aspect of digital mobilization efforts and their limitations set by surveillance, social structure and regulation. He analyses the digital images and speech acts in respect to studies on the institutions and forces that shape and challenge minor(itarian) subjectivities within the nation-state.